Learn how to develop and deploy web applications with Docker technologies. Take your DevOps skills to the next level.

This course covers all the fundamentals of Docker software and teaches you everything you need to know about developing and deploying modern applications with Docker software.

At the end of this course, you will gain in-depth knowledge about Docker software and general DevOps skills to help your company or your own project to apply the right docker workflow and continuously deliver better software.

What will you learn from this course: 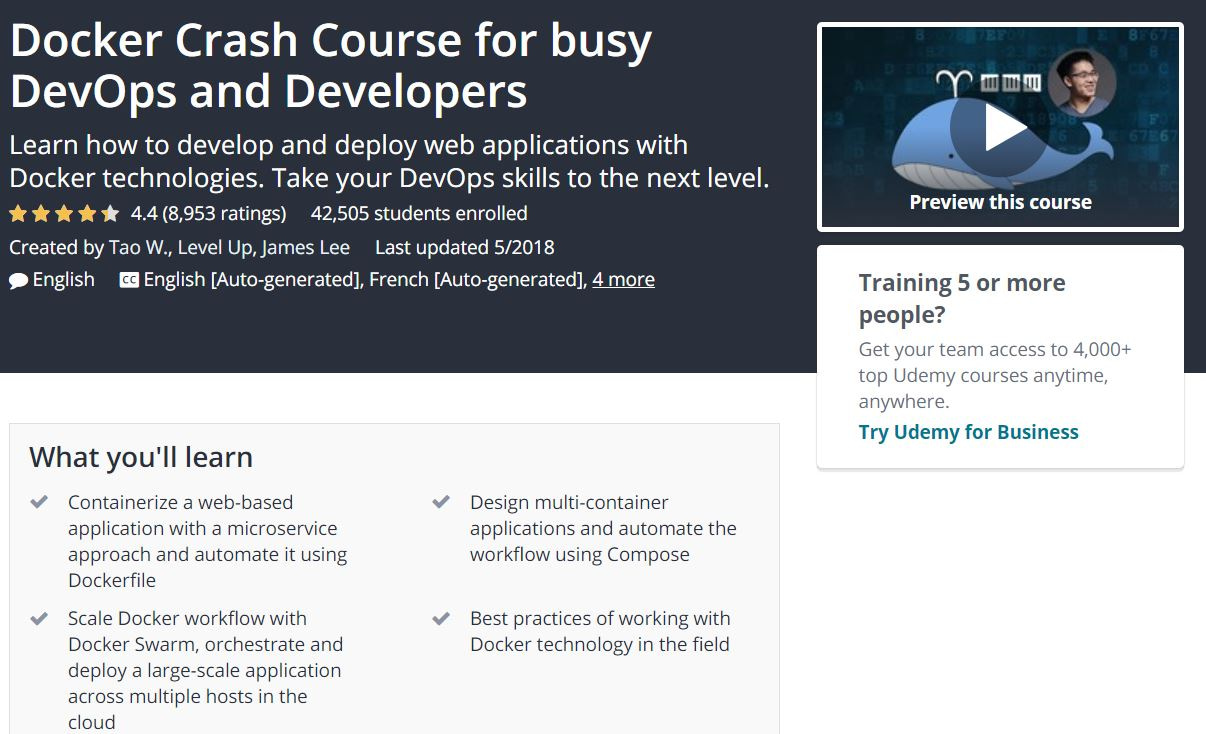 Learn how to develop and deploy web applications with Docker technologies. Take your DevOps skills to the next level.

Docker is becoming a must tool for developers. containers and the Docker’s approach gives you the opportunity to work without any need for dependencies. Docker allows developers to focus on the things which actually matter without worrying about the environment where the application runs.

Tons of companies are using docker in production, today you have access to that same virtualization technology right on your desktop.

Nowadays DevOps engineers are in great demand in the IT industry. Companies are looking for developers who can both develop and deploy the applications.

The average salary of a DevOps engineer is about $140,000 per year in the Silicon Valley area which is 20% higher than the salary of a software engineer.

Master DevOps Skills means you will be staying ahead in the competitive job market!

This course is very hands-on, James has put lots of effort to provide you with not only the theory but also real-life examples of developing Docker applications that you can try out on your own laptop.

James has uploaded all the source code to Github and you will be able to follow along with either Windows, MAC OS or Linux.

At the end of this course, James is confident that you will gain in-depth knowledge about Docker and general DevOps skills to help your company or your own project to apply the right docker workflow and continuously deliver better software.

Added to wishlistRemoved from wishlist 0

Complete Python Bootcamp: Go from zero to hero in Python 3

Course Saving is a Course Comparision and Review platform that Reviews courses online and compares them bases on the content and quality and Recommend the best course that students can enroll.

We also serve Coupons and offers on online educational platforms for saving.

Disclosure: Some of the links may be affiliate links and we may get a part of the Commission for any sale through those links.